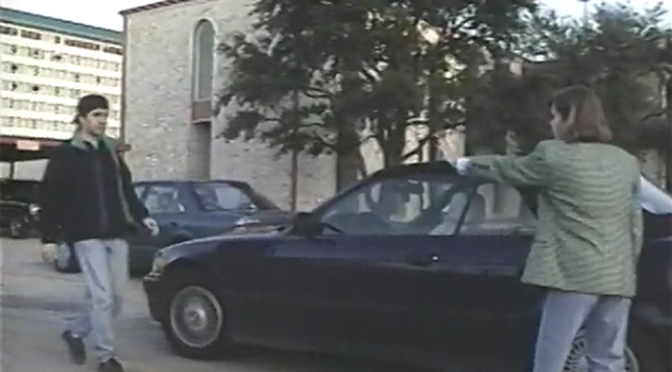 In the time it takes to read this review, criminals across the United States will have committed roughly three robberies, half of a rape, and about 12.5% of a murder. All this, it should be said, is calculated according to the crime rates used (without citation) at the beginning of the 1994 self-defense video, Trust Your Instincts. I feel as though about 80% of videos like this one start off with ghastly statistics about violent crime, and of those, about 50% reinforce their bullet-point precautions with title cards in ALL CAPS. This video utilizes 100% of the aforementioned techniques during its 24-minute run-time.

All of the situational dramatizations in Trust Your Instincts involve solitary women as targets of crime; this was apparently not intended to be a general-audience “street smarts” overview, but rather one targeted to a female audience (though its content could certainly be applied by anybody). The program steers clear of any truly egregious, genderized precautions — like those regulating clothing or physical appearance — but there are still some head-scratchers. The narration advises that if possible, a woman should use a male voice on her answering machine in the event that a random creeper calls her phone number. Do the filmmakers intend for the woman to imitate a raspy voice in a low-pitch to accomplish this? Voice work is a difficult skill! The film also states that both elevators and stairwells are dangerous places to be avoided. By this logic, the only remaining safe option is milling aimlessly around the lobby.

It should be no great surprise that the self-defense video market boomed in lockstep with the martial arts movie craze of the 1980s and 90s. Unlike most self-defense VHS efforts from this period, though, the primary focus here is on preventative measures, not reactive ones (the narration begins with “this is not a karate course.”) Safeguards like avoiding eye contact, keeping your home doors and windows locked, and having your keys in your hand before you reach your car are among the film’s key points. If a situation feels funny, trust your gut. And all of these are certainly useful! (Though one probably can’t be expected to look *under* one’s car every time they come back from the grocery store). This is not to say it ignores defense measures entirely, though, as ear-biting, slaps to the ear-drum, and eye gouges are very much still on the table (and demonstrated at full speed). Don’t expect to land that full-extension kick to the groin, though; attackers are often overprotective of this area, so you’re better served using a swift knee at closer range…

While there’s some valuable, real-world-tested information here — supposedly, an actual detective named Buzz Griffeth acted as technical adviser — the overall presentation is a bit unimaginative, and some of the narration seems hastily written. This is not so much a VHS curiosity as it is evidence of an educational video company growing out its catalog offerings. It neglects to offer anything novel within a special interest video genre that was well saturated by this point in time.