When the American news cycle starts to contain stories of catastrophic injuries and failed adherence to concussion protocols, it means the NFL season has arrived. Often lost in the deluge of bloviating talking heads and game highlights are the rule changes approved by team owners during the league’s offseason (there were seven this year alone). Such changes — which occur nearly every offseason — can affect everything from player safety to the pace of the game itself. With so much turnover in how the game is played from year to year, how does a football fan keep track of it all? And more important, how can someone married to a football fan keep track of it when they are: a) not a fan of football; and b) a woman? Filmmaker Rebecca Ayers sought to assuage all gender-specific, football-illiterate fears with her 1999 educational film, Football: A Woman’s Guide. 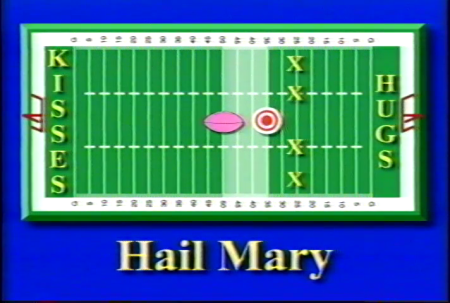 Nancy Barnes, as star and narrator, sets the premise for us: she wanted to build a closer relationship with her (on-screen) husband by pursuing an interest together. Since he never showed interest in her hobbies (he’s a jerk), she decided to participate in his main passion: watching American football (violently eating chips, as the title sequence demonstrates, was not considered). These early efforts were futile because as a self-described “football airhead,” she didn’t understand the rules of the game. Only after learning that there is “a right and wrong way of sharing football with those who love it,” is she now able to relate football “truths” and concepts to a wider audience.

Barnes has good screen presence and her narration is engaging, utilizing a mix of facts and humor to describe situations about the game (and the sports fan dynamic) that may be unfamiliar to beginners to the sport. The film uses basic animations to illustrate gameplay and offensive and defensive situations. The information itself is accurate and the conclusions about various facets of the game are sound; it covers everything from player positions to neutral zone infractions. Where the film goes completely off the rails and  insults its audience — especially considering its 1999 production date — is in the contrived, genderized approach it takes to analogies and examples. The narration describes the field as “almost as big as most shopping malls.” To get an impression of how the offense moves the ball forward, “imagine throwing a package from Macy’s to Sears, and having your friend catch it.” The two “teams” used to illustrate concepts are named the “Kisses” and “Hugs.” Why is the animated football pink? Because women, apparently. So, if getting hit over the head with a notion of womanhood that revolves entirely around the shopping experience is not your cup of tea, you may want to skip this one. 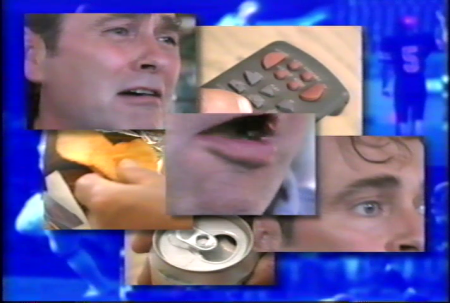 While Ayers’s intentions were probably good — partners enjoying an activity together, even when one of them is a whining, emotionally unavailable couch potato — the product feels outdated and wildly reductive due to the aforementioned missteps. While not the first film of its kind — Tackling Football: A Woman’s Guide to Watching the Game was released in 1986 — it arrived during a wave of football-oriented literature written by women and marketed towards women in the late 1990s.