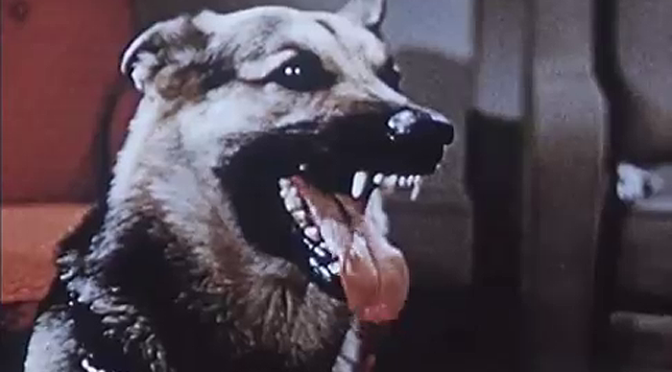 While the Halloween costumes of today are often clever, shameless, or absurdly referential, their burlap and paper counterparts from last century still hold the crown for creepy (see related links below). The main character in 1953’s HALLOWEEN PARTY brandishes one such mask in a way that inadvertently sets off a chain of events which concludes with him wearing a straw hat and covered in his mother’s lipstick. I should probably explain.

The opening night-time scene finds a mother with her young son and daughter in their living room as a strange hand knocks on the window. It turns out to be their father, who has brought home a pumpkin for carving. The son, Peter, dons his homemade paper cat mask — the one he plans to wear for his school’s costume parade the next day — to antagonize the family dog, Shep, who bares his teeth in response. Moments later, Shep is sniffing around the now-topless pumpkin hoping to scarf down some seeds, and is denied by the father. When the family lights up the finished jack o’lantern and places it in the window, Shep growls at it in fear. The family has a good laugh at his expense and shuts off the lights, leaving their family pet to a sleepless night in the living room with this glowing, fearsome pumpkin.

The next day, with his owners away, Shep gets a hold of Peter’s cat mask and chews it beyond repair. Mother and the children arrive home moments later and the boy is beside himself. With some quick thinking and a few household items, the mother finishes an alternate costume — a “lady scarecrow,” as the narrator describes it — just in time for the post-lunch costume parade and contest, which Peter wins.

The narration would have us believe that this is the story of a mother who saves Halloween by innovating a last-minute costume idea for her despondent son. However, I’d argue this is a dog vs. man revenge tale, where a hostile child receives his comeuppance when his canine victim destroys the very cat mask used to traumatize him. Additionally, I didn’t interpret Shep jumping over the kids at the end of the film as an expression of happiness for helping Peter win the costume contest, as the narrator describes, but rather a warning to Peter to not get a big ego following the victory. Shep can destroy any belongings at any time. He can destroy your homework, your shoes, and even your hands, should he choose to do so.

While there’s nothing remarkable about the editing or camera work, the opening exterior shot peering into the family’s living room helped to set the mood, even if the rest of the events and cheery narration didn’t quite follow suit. (That said, we should acknowledge that the likely target audience for the film was comprised of elementary school children). Additionally, some technical glitches persist with this particular digital transfer — the source film is reasonably believed to be 16mm — where there are at least three instances of dropped frames and audio. This doesn’t necessarily translate to lost meaning, but it’s a caveat worth noting.

The film was produced in collaboration with Dr. Willard Abraham, a professor of education at Arizona State College (Tempe) who also consulted on other 1950s Encyclopaedia Britannica films such as FLYING A KITE, FRANK AND HIS DOG, and A SURPRISE FOR JEAN.